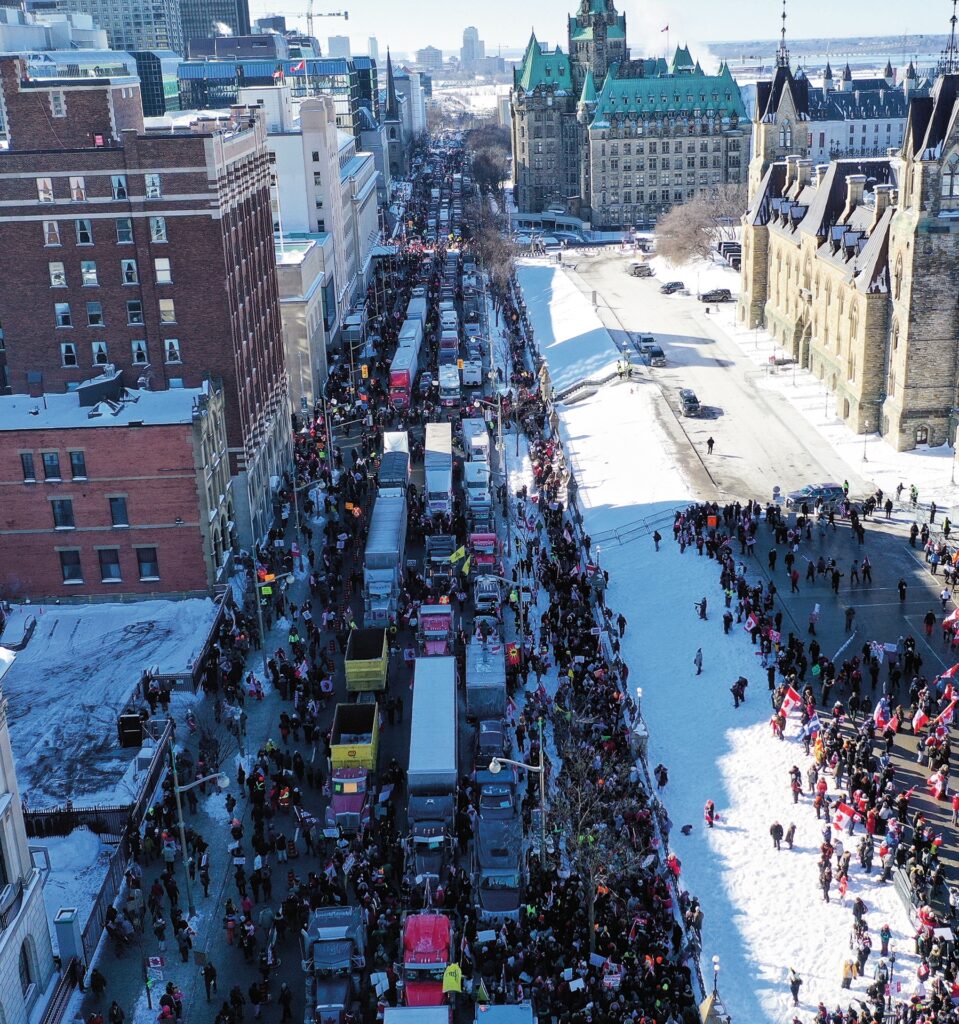 ANDRE PICHETTE / KEYSTONE
Not backing off: Truckers in Ottawa.

Trudeau vs Truckers for freedom

Canada’s ‘freedom convoy’ against the COVID-19-rules is a mass movement. Its supporters are people from all walks of life and diverse political opinions. Will Prime Minister Trudeau finally accept that the tide is turning?

Prime Minister Justin Trudeau famously denounced the trucker protest convoy that's made its way across Canada as nothing more than a "small fringe minority". But the facts on the ground show that's not the case and that this movement that's garnered international attention and support may be speaking for many more -- perhaps even a majority -- of Canadians.

Here's how things look in Canada right now: As of the end of January, 90% of adults are doubled vaccinated and almost 50% have received a booster shot. Public health officials have confirmed that the omicron variant is proving significantly milder than previous versions. And now, because of the transmissibility of the virus, more and more Canadians are getting COVID, having a mild experience with it and realizing that it’s just not worth locking the country down over.

Despite all of this, the country still faces heavy-handed COVID-19 rules, with vaccine passports for everyone 12 and up and mandatory masking still in place. The country’s two most populous provinces – Ontario and Quebec – only just ended their latest lockdowns on Monday, that saw gyms, restaurants, organized sports, event spaces and more shut down.

The pandemic rule that spurred the convoy is a new vaccine mandate brought in by Prime Minister Justin Trudeau, only introduced the other week, that says truck drivers must be double vaccinated to cross the U.S.- Canada border. (The U.S. has a reciprocal rule in place.)

Industry experts warned that the mandate would only worsen supply chain issues – causing potential food shortages and an increase in prices.

Trudeau initially blinked, with government sources saying they wouldn’t go ahead with the new mandate, but then he decided to introduce it after all. Some frustrated truckers then announced that they would drive across Canada – geographically, one of the biggest countries in the world – from the British Columbia west coast to Ottawa, the nation’s capital, to show their opposition.

A modest fundraising campaign was posted on GoFundMe, with the goal of raising $20,000 to support the truckers. But that target was met within hours. The ball kept rolling and the pot has since grown to over $9 million. Organizers say the funds will be used to provide fuel, food and accommodation to convoy participants.

There are currently over 113,000 individual donors to the fund. The names and comments from contributors suggest the convoy supporters are people from all walks of life and diverse political opinions. But they all seem to agree on one thing: COVID-19 mandates must end.

As the convoy made its way across the country it was met by grassroots support in many cities, as Canadians lined the sides of the road and highway overpasses to cheer on the truckers and wave flags.

What began as a movement against one specific mandate has now morphed into a much larger symbol -- one of opposition to all broad-based pandemic rules. That fits with an opinion survey released by one of the country’s top pollsters on Monday that found a majority of respondents now believe it’s time to end all restrictions.

In this sense, the convoy and the massive two-day protest turned street party that happened over the weekend on Parliament Hill wasn’t a fringe event, but one representing mainstream opinions. Canadians have watched as the United States, United Kingdom and other countries have done away with most of their COVID-19 rules and are now demanding the same.

They also see how an increasing number of prominent public health officials across the country are now saying it’s time to “live with COVID” and that the virus needs to be managed the way we typically deal with influenza.

Meanwhile, Justin Trudeau – who would not come out to meet the protesters, being in isolation for covid – doesn’t seem to want to accept the tide is turning. He defiantly clings to COVID-19 mandates.

The more diehard truckers though say they’re not leaving Ottawa until the mandates are ended. Whatever happens next, the Canadian convoy has sent a strong message that’s clearly been heard around the world.

Anthony Furey is national oped editor for the Sun chain of newspapers. He is based in Toronto.