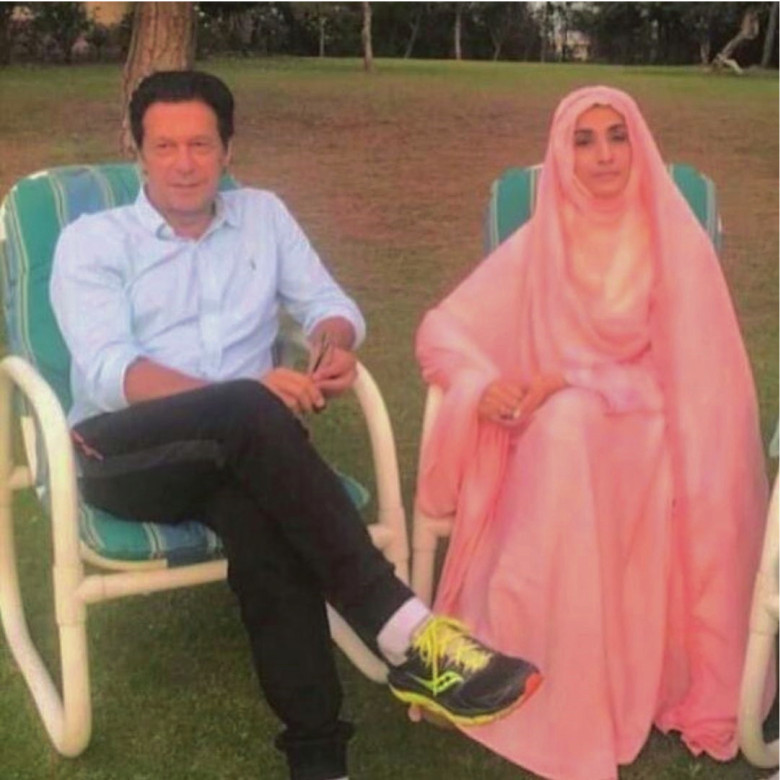 They Call her a Witch: Bushra Bibi, with husband Imran Khan.

In recent years, Sufis have increasingly become the target of attacks by radical Islamic groups. Nevertheless this esoteric branch of Islam enjoys a large following and is not an insignificant force in the political arena. Indeed Pakistan’s First Lady Bushra Bibi, a Sufi master, is a strong influence on her husband, Prime Minister Imran Khan.

Bushra Bibi, the wife of Imran Khan is a witch. At least that is the story put about by his enemies. Six months before becoming the prime minister of Pakistan in 2018, Khan married Bushra Bibi, a veiled Sufi pir (guru) from Pakpattan. This city in the Punjab, close to the border with India, is home to the shrine of Baba Farid, a 12th Century Sufi guru; it was Imran Khan’s interest in this saint that drew him into the orbit of Bushra Bibi who became his spiritual teacher and then wife.

Having discovered that she was divorced, Imran married her without ever seeing her face. Ironically it is said by the couple’s enemies that proof that Bushra Bibi is a witch is that her face cannot be seen in a mirror. Accusations of dark arts are nothing new in politics. Famously President Reagan’s wife Nancy was accused of ruling America through her psychic advisor.

Imran has been nothing if not eclectic in his choice of wives. His first wife, Jemima, was the dazzling young daughter of famed Anglo-French Jewish politician and leverage buyout billionaire, Sir James Goldsmith. It was a liaison that was not so surprising given Imran’s global reputation as a playboy; he knocked over the socialite beauties of London as easily as he knocked over English batsmen as captain of Pakistan’s 1992 World Cup cricket winning team. His second marriage to a Pakistani journalist and broadcaster Reham Nayyar lasted just six months. She wrote a scurrilous account of their marriage; he described it as the worst mistake of his life.

Naturally sceptics – mainly political enemies – have tried to portray Imran’s marriage to Bushra Bibi as a political manoeuvre designed to burnish his religious and therefore electoral credentials. Hogwash! Albeit born a Sunni Muslim, Imran Khan became a devout religious man in his mid-thirties after retirement from cricket and the death of his mother from cancer. Rather than use his God-like status as Pakistan’s greatest cricketer to make money for himself he travelled the world to raise money from the expatriate community to build Asia’s largest cancer hospital named after his mother Shaukat Khan. Equipped with the most modern medical equipment this remarkable centre treats most its patients for free.

Imran himself, rather than sticking solely to formulaic Sunni belief that is followed by over 90 percent of Pakistan’s population, has always been attracted to Sufism. Sufism, which can broadly be described as the mystical branch of Islam, is coterminous with Sunni Islam; almost two thirds of Pakistani’s would describe themselves as both Muslim and Sufi.

At a popular level Sufism can be seen as devotion to shrines and local saints. However, at a more elite level, particularly among educated middle-class Muslims, the practice of Sufism throughout the Middle East is more associated with meditative practice and artistic expression particular in areas such as poetry of which Rumi (born in Afghanistan in 1207) is the outstanding example. Meditative dance such as that practiced by the dervish in Turkey is another form of Sufi liturgy.

Nusrat Fateh Ali Khan, considered by some to have been the greatest ever singer of Sufi qawwali (songs) performed at Imran’s first wedding in his parent’s garden in Lahore. [I was there.] The act of listening to qawwali is a devotional act. Poetry often set to music is seen by Sufi’s as a way of bridging the gap between man and God; Sufi music aims to reach a crescendo of spiritual ecstasy known as the wajd. Imran, a devotee of Rumi’s poems, himself claims descent from a famous Pashtun Sufi poet and warrior.

The different nature of Sufism was brought home to me at an al fresco lunch with a Chechen leader in the hills above the Georgian Black Sea port of Poti. When I asked him whether he had heard of Georg Gurdjieff, the Russian philosopher, composer and mystic who is sometimes described as a Christian Sufi, he expressed surprise that I knew the work of a man who is a much-revered Sufi guru in Chechnya. Gurdjieff founded his Sufi school, later known as ‘The Work’, in Fontainebleau where he influenced such luminaries as architect Frank Lloyd Wright and writer Kathryn Hulme (The Nun’s Story). His teachings were influenced by the Naqshbandi Sufi order, prevalent in Turkey and the Caucasus; given that Gurdjieff’s followers include Catholics, Jews, protestants and Hindus, his brand of Sufism is hardly likely to appeal to typical Muslim clerics.

It is worth noting that the shrine of Baba Farid that is the spiritual home of Prime Minister Khan and his wife is also revered by Punjabi Sikhs. The poetry of Baba Farid is even incorporated in the most sacred Sikh scripture, the Guru Granth Sahib. The relative warmth of the Sufi and Sikh faiths contrasts with Salafist Jihadis who have attacked both these communities.

Sufism, practiced outside of the hierarchical structures of imams and mosques attracts more than a little opprobrium from the more fundamentalist parts of Islam. For the more puritanical of Islam’s adherents, such as the Deobandis, Salafis and Wahhabis, Sufism is an anathema, even heretical. Over the last decade Sufis have been under attack throughout the Middle East, North Africa and Asia. Hundreds of shrines and meeting houses have been destroyed while many worshippers have killed by suicide bombers.

Attacks on Sufis have been particularly aggressive in Pakistan. Over the last decades there have been atrocities every year. In 2016 Amjad Sabri, a Qawwali singer, was assassinated in Karachi. The following years ISIS attacked the shrine of Pakistan’s most revered Sufi saint, Shahbaz Qalandar; 90 people died and a further 343 were injured.

But it would be a mistake to believe that Sufism represents just the soft face of Islam – tolerant to the point that even women such as Bushra Bibi can attain the rank of a Sufi pir. Women’s prominence in Sufism dates to the 8th Century Iraqi mystic and Muslim saint Rabia of Basra. Sufis have often acted as political leaders. Imran khan’s wife’s family were prominent supporters of his Pakistan Tehreek-e-Insaf Party (PTI).

My own experience of the Naqshbandi Sufi would support this; during the brief period of Chechen independence after the peace treaty with Russia that followed the Khassvyurt Accord I had to fly to Trebizond on Turkey’s Black Sea coast to get a Naqsbandi leader’s blessing before travelling to Chechnya to meet President Aslan Maskhadov. President Putin described him as a Jihadist. He was not. However, after his assassination by Russian FSB special operations troops, and the fall of a briefly independent Chechnya, it is the Jihadists who have gained the upper hand in the terrorist opposition to Russia’s puppet rulers.

Nevertheless, in some states in response to the rise of Salafist terrorism, the political importance of Sufism has grown. After Jihadist attacks by five suicide bombers in Casablanca in 2003 in which 43 people were killed, King Mohammed VI revised his religious policies. Hitherto, it had been assumed that Jihadists would not attack a state whose monarch could trace his lineage to the Prophet Mohammed. Subsequently the King cooperated with the CIA to accept renditioned terrorists for torture. In addition, he promoted Sufism as a preferable ‘moderate’ Islamic path.

The furore over Prime Minister Imran Khan’s wife, ‘the witch’, is insightful of the religious dimension to the politics of Islamic countries. It is sometimes too easy to assume that Islamic politics only relates to the Sunni-Shia divide. Sufism also plays a significant role. The attacks on Imran Khan’s wife reflect the typical knockabout of opposition politics. But there is another perspective. Imran Khan’s fervent adoption of Sufism is a red flag to the more orthodox voices of Sunni Islam in Pakistan. Sufism may be viewed as the moderate branch of Islam, but in the Middle East and Asia it cannot help being dragged into the political mire.