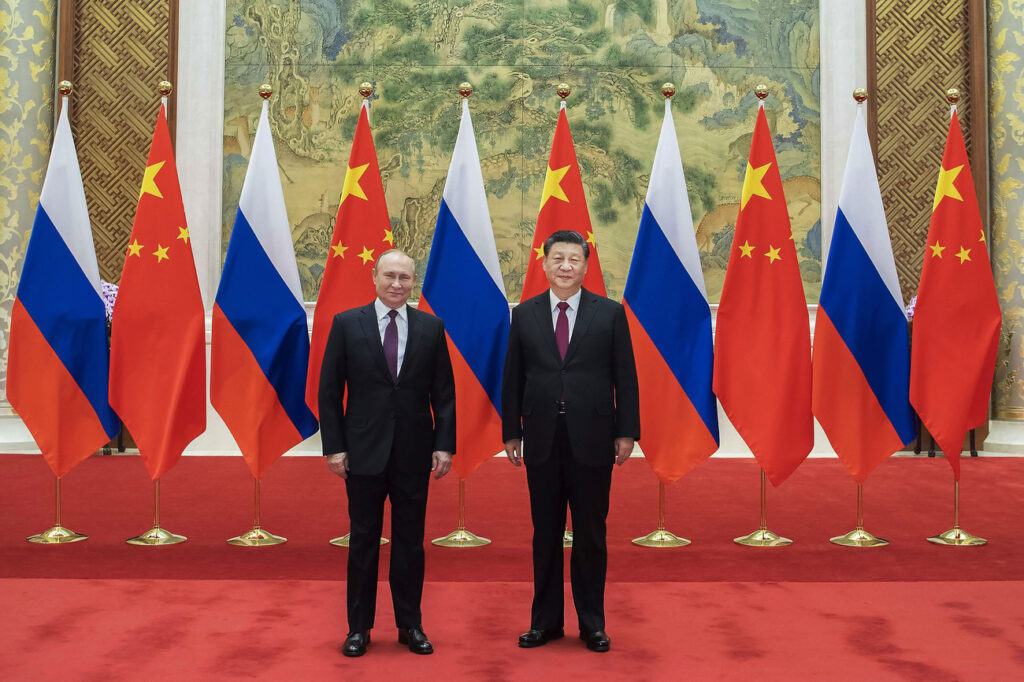 In the Ukraine Crisis China will only help itself

The belief that China will ride to the rescue and stop the war in Ukraine is wishful thinking. China will use the crisis to protect and expand its own interests. In particular the de-dollarisation of Russia may be another building block used in China’s strategy to dethrone a US dollar that has dominated global trade since the Bretton Woods agreement in 1945.

First disbelief, then rage and finally hope – the grasping at straws kind of hope. That is the emotional roller coaster that West’s media has led us on since Vladimir Putin’s invasion of Ukraine.

The straws of hope included: Putin only wants to control the Donbas – the Russian Army will run out of food and petrol – the Ukrainians will fight to the death and win - Russian troops will refuse to fight - Putin will be assassinated in a palace coup - China, Russia’s ally, will ride to Ukraine’s rescue.

The last of these hopes is surely the biggest pipedream of all. China is the country that has, over the last five years, become the world’s pariah; it is the country which has swept aside its neighbours in the South China Sea, supressed the Uighurs, and crushed dissent in Hong Kong while threatening a stranglehold on world trade with its ‘Belt and Road’ strategy. Overnight a delusional Western media turned Xi Jinping from bogeyman to potential white knight.

More likely China’s response to the Ukraine crisis will be self-serving. The full-scale invasion of Russia probably came as much of a shock to China as to the Russian elites. But then again will China inform Russia when it is about to invade Taiwan? For sure, China does not want the conflagration in Ukraine to spiral out of control into Europe; that would be counterproductive for China’s economy. However, it would be far-fetched to believe that China has significant geopolitical, let alone humanitarian interest in Ukraine’s fate.

Neither should the West deduce that China’s refusal to either condemn or support Russia’s invasion of Ukraine indicates a cooling of relations with Russia. Rather it should be understood that it is not in China’s self-interest to share the global opprobrium now being directed at their junior partner. Out of the glare of the spotlight, China can continue less noisily on its path of global domination. It can only be to China’s advantage that Russia has usurped its position as the West’s bête noir.

This does not mean that China is not interested in the Ukrainian conflict. China, given Xi Jinping’s stated aim to take control of its former province Taiwan by 2032, will be gauging the West’s reaction to the invasion. They will note the enraged response of western consumers and companies. Cancel culture has gone geopolitical. But no doubt China will question whether the West would be so keen to cancel their vastly more important Chinese operations if Xi invades Taiwan.

Xi Jinping will also note the West’s treading on eggshells with regard to escalating a larger regional conflict. Whatever US leaders state publicly, might not its reluctance to engage more fully in the Ukraine give Xi Jinping confidence that, with a similar threat of nuclear war, America would not intervene in a China-Taiwan conflict? It would be presumptuous of the West to think that an invasion of Taiwan was now less likely.

The ejection of Russian banks from the SWIFT payments system by the West, including even historically neutral Switzerland, will have repercussions on the world’s economy and a global financial system that is already under strain from Covid’s effect on supply chains, energy shortages, reckless Central Bank monetary expansion and President Joe Biden’s inflationary fiscal policies.

With the concomitant seizure of the assets of Russian oligarchs, many of them now only tenuously connected to Putin’s regime, what confidence are the wealthy citizens of states morally repugnant to the West, such as China and the autocratic states of the Middle East, going to have in the US and Europe’s good faith and traditional respect for the rights of property? Will Chinese companies continue to invest in the West? In view of the British government’s effective confiscation of Russian oligarch Roman Abramovich’s Chelsea FC, it should be assumed that Chinese billionaires will not be buying any of the UK’s premier league clubs anytime soon.

China will see an opportunity in the Ukrainian crisis. Joseph Steglitz, former chief economist at the World Bank has long predicted that the Bretton Woods model, which established the dollar as the world’s reserve currency, is not sustainable. During the 2008 global financial crisis China proposed the creation of a new world reserve currency. It was an idea supported by Russia, India and Brazil.

Predictably US treasury secretary, Tim Geithner, squashed this notion, though the then IMF Chairman, Dominique Strauss-Kahn, supported the legitimacy of such discussions. More recently, in 2019 Canadian Mark Carney, Governor of the Bank of England, advocated the replacement of the Dollar as the world’s reserve currency.

Since then, the Chinese Yuan has quietly made progress. In 2015, after it passed the Japanese Yen in global usage, the IMF awarded the Yuan reserve currency status where it joined the US Dollar, the Yen, the Euro and the British Pound. Yuan trading hubs have opened in the US, London and Singapore.

At present, China’s Yuan is not free-floating and could not sustain usage as the world’s reserve currency. Albeit growing, in 2021 the Yuan accounts for just 2% of central bank reserves versus 59% for the US dollar, a 25-year low. Noticeably the Yuan accounts for 12% of Chinese reserves. There seems little doubt that China casts an envious eye at the advantages delivered by the US dollar’s world reserve currency status.

In the aftermath of the West’s financial treatment of Russia, some central banks may look again at increasing their Yuan and gold holdings at the expense of Western currencies. China will encourage this, just as it has pressured Saudi Arabia to de-dollarize it oil contracts and use the Yuan instead. Removing Saudi oil from the dollar would take about US$800bn out of the dollar market. Even India, which is the biggest customer of Russian armaments, may not be averse to de-dollarization.

Over the last decade China, Russia and India have become three of the world’s major purchasers of gold. China is also promoting the use of Yuan denominated ‘Panda’ bonds, the first issuance of which was done by the Russian aluminium giant Rusal in 2017. In Hong Kong ‘Dim Sum’ bonds, using the offshore Yuan market, have been raised by several Russian companies.

In 2021 the world’s central banks’ holdings of gold as a percentage of reserves hit a 31-year high and was up 15% over the last decade. In a July 2021 US Congressional Report, it was revealed that the People’s Bank of China’s was aiming to become the first to issue sovereign digital currency to propel the Yuan’s internationalization and reduce dependence on the dollar. China’s gold strategy, combined with the successful launch in January of China’s own digital currency, e-CNY, which is convertible into 16 national currencies, is partially aimed at the long-term undermining of SWIFT.

Meanwhile, just as the West is banning Russian energy imports, China is ramping them up. Already the Russian Altai Pipeline feeds gas into Xinjiang province through the 23km wide Dzungaria Gap between Kazakhstan and Mongolia. But just prior to the invasion of Ukraine, a deal was signed with Russia for a new ‘Power of Siberia’ pipeline that will feed gas eastwards into the Sakhalin Island pipeline that runs into northern China (formerly Manchuria) via Vladivostok.

Cheaper gas for China will provide heating for its burgeoning middle classes as well as securing its industrial competitiveness vis-à-vis the West. In 2020 Russian energy exports to China increased by 47.4% to US$53bn and can be expected to double again over the next five years.

The de-linking of Russia, the world’s third largest exporter of oil and gas, from the European energy markets and the global dollar system may therefore provide China with another opening in its long-term plan to topple the West’s global economic and financial hegemony. The de-dollarization of Russian energy exports could be a tipping point. For China, the Russian invasion of Ukraine, is a gift that will keep on giving.