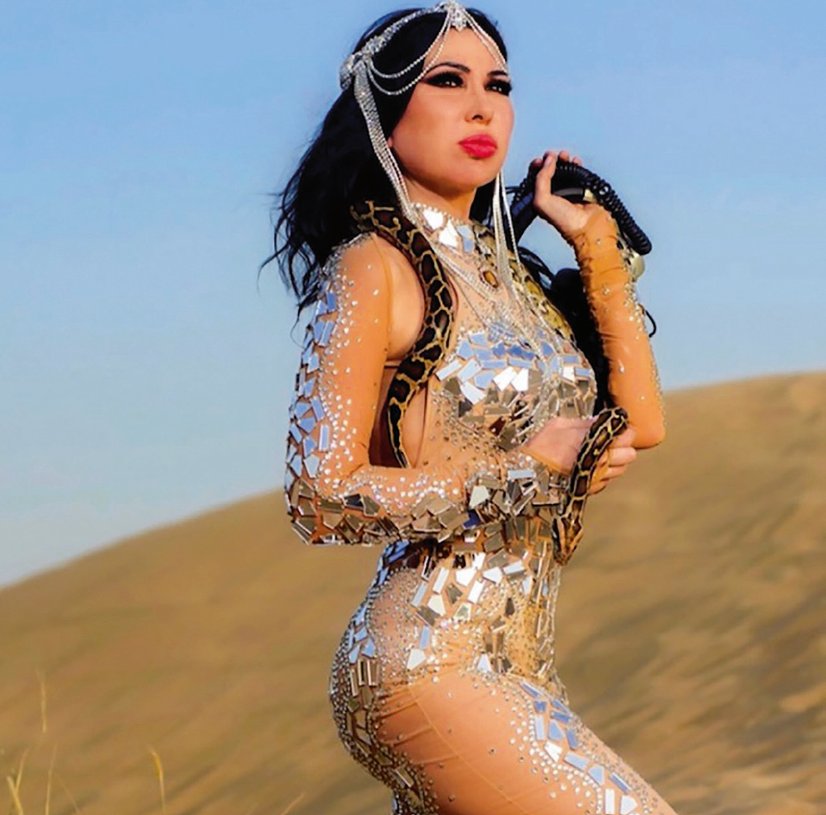 "I need four rabbits and some mice": Daiana Zemskova.

Her snake dance entrances Arab princes. Hollywood stars book her for private performances. The Russian lives her very own fairytale.

In the glittering paradise of Dubai lies the fairytale city of Madinat Jumeira, a miniature Venice, crisscrossed by artificial canals in the shadow of the majestic Burj al-Arab, the fourth highest tower in the world. In the midst of this splendor, I join Daiana Zemskova at the “Taverna” for dinner. With her pitch-black hair, leather gloves, and a Dreamcatcher draped around her neck, she relaxes on a white cushion.

"I need four rabbits and some mice," she says as she browses the menu. "But they have to be fresh."

"They serve rabbits and mice, here, at the noble Taverna?" I reply in amazement.

Daiana bursts into hearty laughter. "Oh, I just remembered I have to feed my two pythons."

Daiana dismisses the indignant looks from the next table with a smirk. She has always done her own thing and ignored critics. This is why she is sitting here now, in paradise, with the Arab world at her feet. With her company Daianaz Events & Entertainments, she stages extravaganzas for oil sheiks and royalty. For movie stars, like Morgan Freeman and "Sex and the City" star Sarah Jessica Parker, she arranges private shows. Never missing are her two favorite pythons, Lord and Pharaoh.

As a girl, in faraway Kyrgyzstan in the final phase of the Soviet Empire, Daiana lived in a fantasy world. She drew, she sang, she danced. At the age of ten, she pushed her way into art school. Her mother, employed by the military, was strictly against it. "Artists are like cleaning women," she explained. Daiana forged her mother's signature on the application and was promptly accepted.

She earned her first money with drawings of Madonna and bare breasted women. Western magazines were scarce in the Soviet Union. Daiana's portraits sold like hotcakes. At eighteen, she won a casting call and became part of Russia’s first contingent of models and dancers to China.

Shanghai, though, was too small for Daiana’s ambitions. From childhood on, she had dreamed of "Alice in Wonderland," her favorite book. So, she set off to Dubai. During the day, she worked as a fitness trainer. At night, she let her belly dance. Then, something happened that only existed in fairytales. A prince fell in love with her and not just any prince. Her prince descended from a close comrade-in-arms of the legendary Lawrence of Arabia who led the Arab Revolt a hundred years ago and in whose honor the family has since borne the name "Awrence."

"He was a wonderful man, handsome, kind, humorous," she reminisces. The prince even granted Daiana's exotic wedding wish, albeit reluctantly: her first python.

But unlike her new pet, Daiana refused to be caged, and her prince let her go. Since then, a single woman, she has been on her own. She has recently been working her magic behind the DJ booth. Her first deep house mix is called, appropriately enough, "Serpenta."